The Lynchburg Regional Business Alliance recently launched the region’s first Business Hall of Fame, celebrating business and civic leaders whose accomplishments are both outstanding and historically significant.
These inductees have impacted business, industry and the community of the Lynchburg Region in some substantial manner, either through sustained superior accomplishment or through a specific important achievement. These individuals are as recognizable as a leading household brand, critical to the region’s existing business landscape.

Our region’s dynamic business leaders have a long standing of providing economic stability and fostering growth to make our economy the best it can be. The Alliance is excited to recognize past and present business and community leaders for their lifetime achievements advancing the Lynchburg Region. 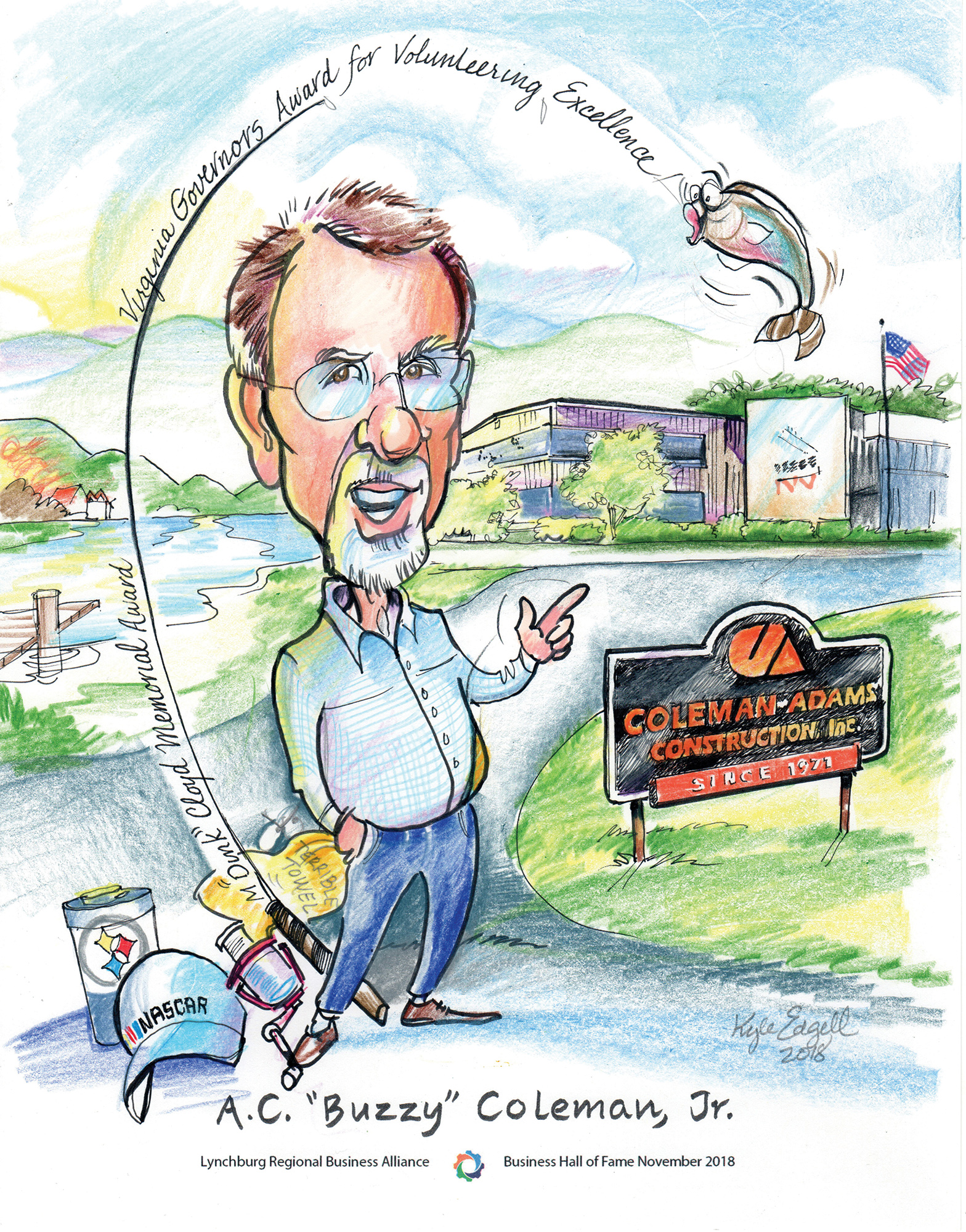 Buzzy Coleman is a graduate of E.C. Glass High School. He founded Coleman-Adams Construction in 1971 with Vincen L. Adams and became a Butler pre-engineered building franchisee in 1974.

Coleman-Adams Construction originated from a fourth generation commercial and industrial construction family and is continuing the fine service brought forth in previous years by the original Coleman Construction Company, thus maintaining one of the earliest Virginia state registration numbers, 541.

Additionally, Buzzy and his company have received many recognitions to include numerous awards from Butler over the years. He received the F.M. “Dink” Cloyd Memorial Award in 1991 from the Lynchburg Regional Business Alliance.
In addition, Buzzy received the Virginia Governor’s Award for Volunteering Excellence in 1991, the Honorary Associate in Humane Letters degree from Central Virginia Community College in the late 80’s, and an Honorary Doctor of Humanities degree from Liberty University in 2011. 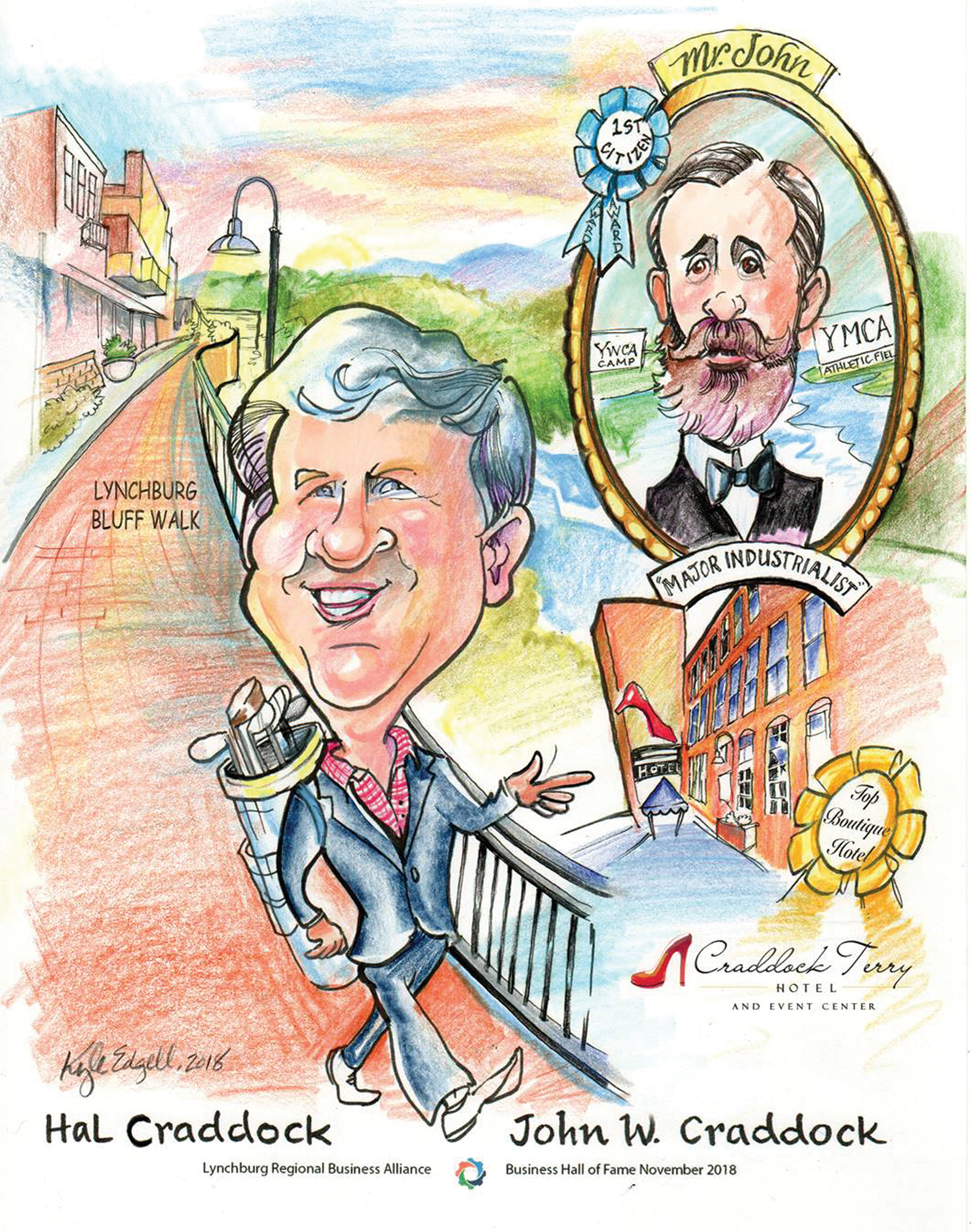 Hal Craddock was founder and partner of Craddock Cunningham Architectural Partners in Lynchburg, where he served as principal, partner and president for over 30 years. The firm (now called Architectural Partners) has created a wide body of successful and award-winning design work focused on the adaptive use of older and historic buildings and the master planning and architectural expansion of Virginia’s private independent colleges and secondary schools.

He helped plan and develop Lynchburg’s highly successful downtown and Riverfront and is a principal owner and developer of the Bluffwalk Center which converted an 1896 tobacco warehouse and a 1905 shoe factory into an award-winning hospitality complex. Bluffwalk includes the forty-four guestroom Craddock Terry Hotel and Event Center, Shoemakers American Grille, and Waterstone Pizza Restaurant and Brewpub.

He strongly believes in storytelling, vision and creative design as a means for struggling areas to convert their economies from traditional manufacturing, extraction, and agriculture, to destination tourism and experiential hospitality. 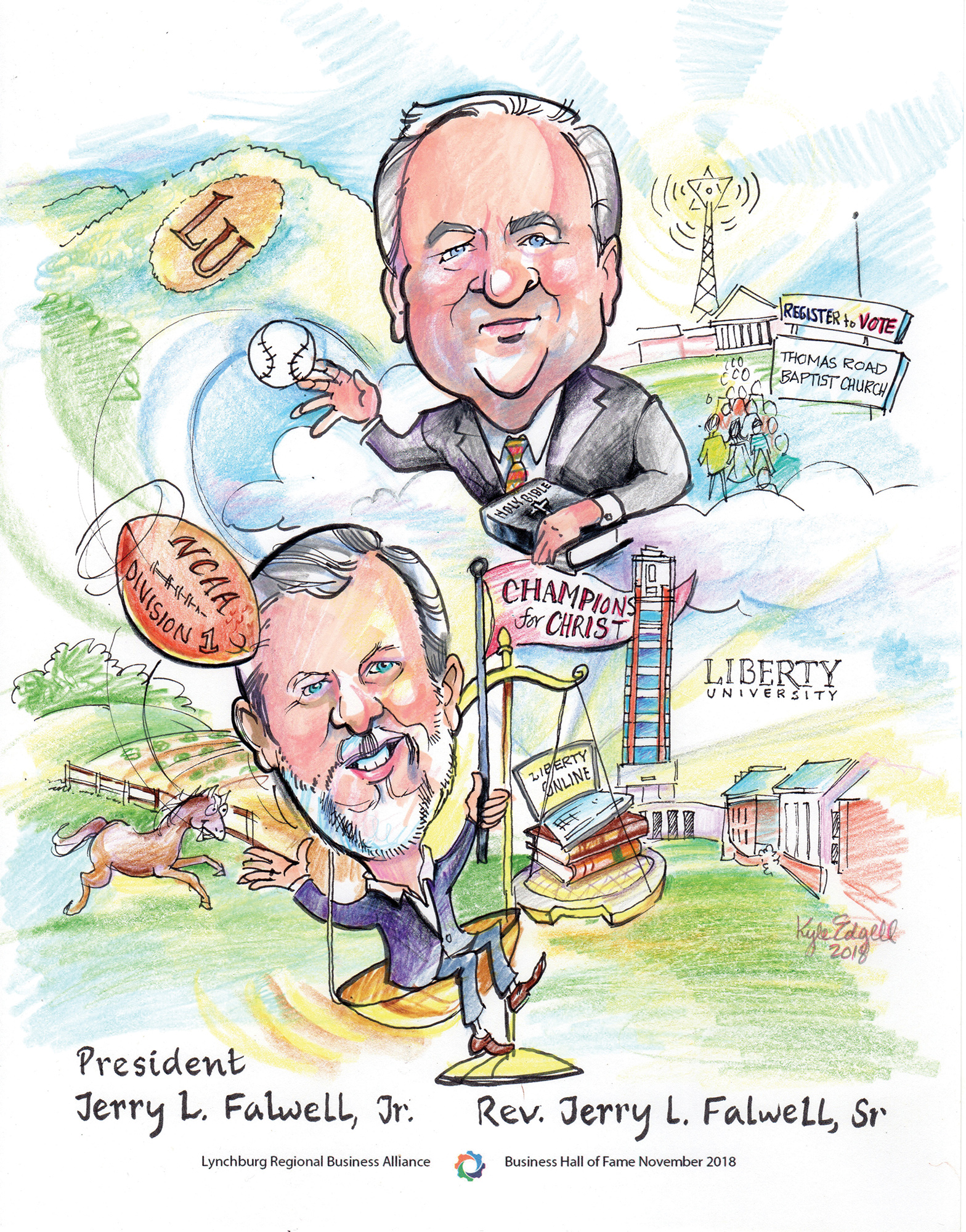 Jerry Falwell, Jr., graduated from elementary and high school at Liberty Christian Academy and earned his Bachelor’s degree in Religious Studies and History at Liberty University. Then, with a letter of recommendation written by Senator Ted Kennedy, he entered the prestigious University of Virginia School of Law.

In 1987, Jerry obtained his Juris Doctor degree. Over the next twenty years, he earned his living as both a lawyer and a commercial real estate developer. He recruited national retail and restaurant chains creating what has become the most vital hub of retail activity within Lynchburg.

Ever since the Board of Trustees appointed Jerry as the next leader of the university, Liberty has exploded in growth—in academic status, athletic reputation, size of enrollment, financial stewardship, and capital improvements. In just over a decade, the combined student body (residential and online) has grown from 38,000 to over 100,000. This growth has catapulted Liberty into being ranked as the second largest private nonprofit university in the nation.
Because Jerry has overseen a billion dollars of ongoing or planned construction, the beautiful 7,000-acre campus now has over 350 buildings that are in constant service to the university’s endless variety of activities. He knows that a key part of leadership is cultivating a culture where students aim to become the right kind of people. As such, Jerry has led the university to embrace a deep understanding of that word his father used so often: Champion. 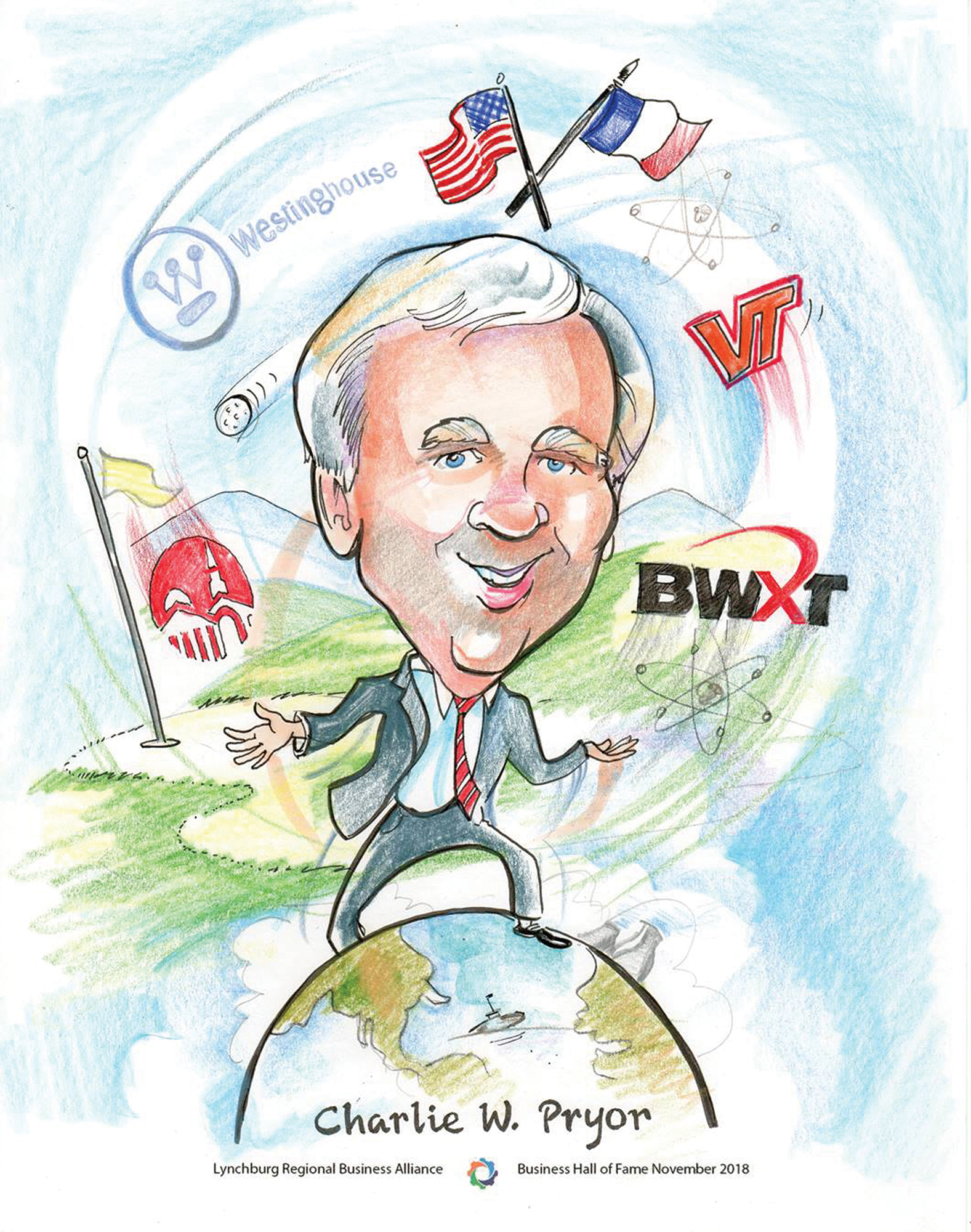 Charlie W. Pryor is currently the lead independent director for BWX Technologies, Inc. (BWXT). He is the former chairman of Urenco USA Inc. based in Arlington, Virginia. Urenco USA Inc. is the North American division of Urenco Ltd., a global supplier of uranium enrichment services based in Stoke Poges, England.

Dr. Pryor is a member of the board of directors of DTE Energy Company and previously served as a director of Progress Energy. He is the former chairman and chief executive officer of the Westinghouse Electric Company. While at Westinghouse, he led the company’s growth to over $2 billion in annual revenue worth employment of over 10,000 people.

Dr. Pryor spent 25 years with The Babcock & Wilcox Company (now known as BWXT) and was president of the B&W Nuclear Power Division. He served as CEO of B&W Nuclear Technologies until retiring and starting his own management consulting business before joining Westinghouse.

In 1993, Dr. Pryor was named the State of Virginia’s “Outstanding Industrialist.” Additionally, French President Francois Mitterrand presented Pryor with the distinguished Chevalier de ‘Ordre National du Merit developing business relationships between the United States and France in 1991. He was also elected to the National Academy of Engineering list.

Locally, Dr. Pryor served on the boards of University of Lynchburg, Randolph College, Central Virginia Community College and Centra Health. He also served as president of the Greater Lynchburg Chamber of Commerce. He holds an MBA from Northwestern University and earned bachelor’s, master’s and doctorate degrees from Virginia Tech. 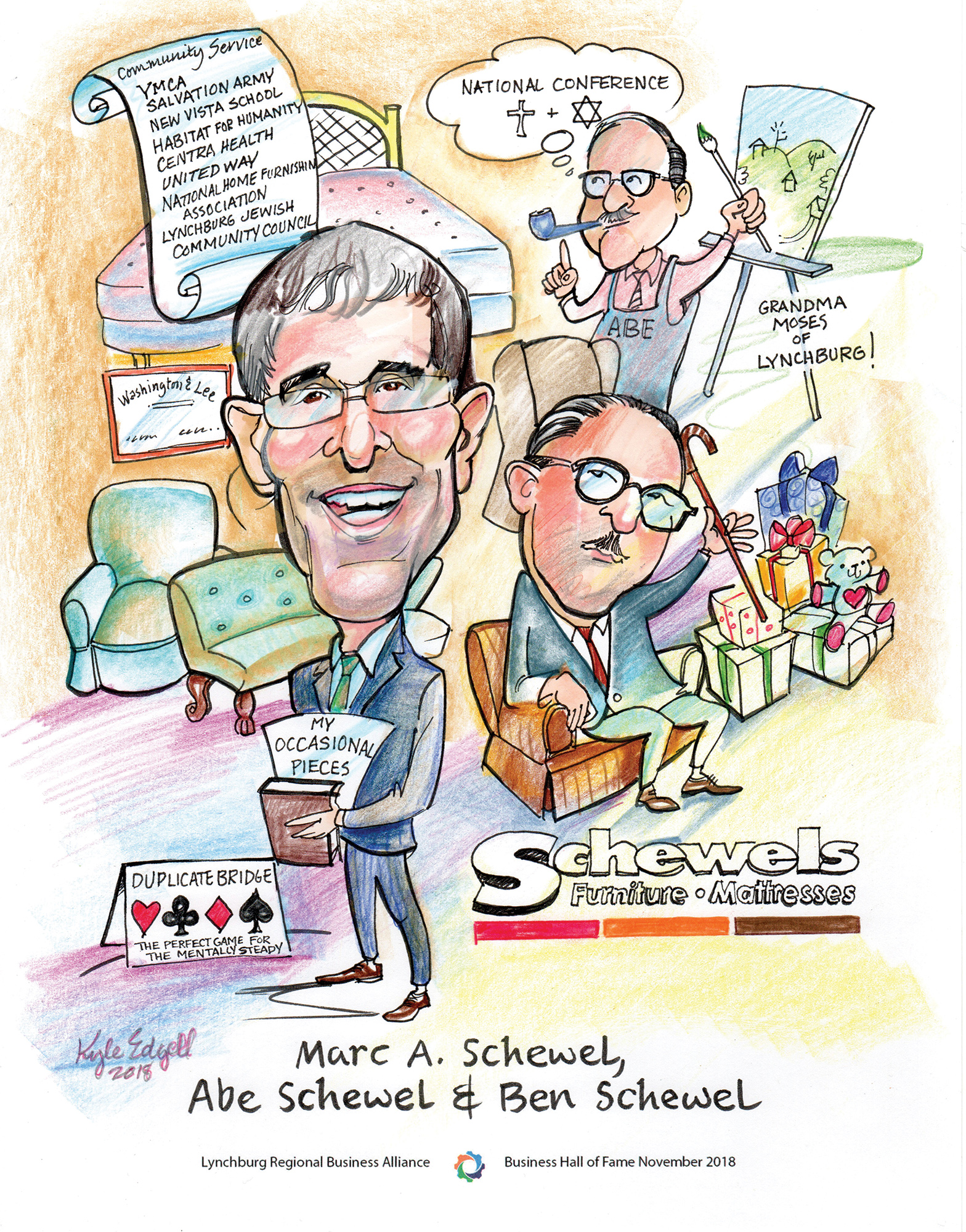 Marc Schewel, Ben’s grandson and the company’s current president, is a native of Lynchburg and a graduate of E.C. Glass High School and Washington and Lee University. He went to work for the company in 1970 after teaching English one year at Appomattox County High School. With the blessing of his father Bert, who was running the business at the time, he quickly became immersed in its various aspects: store operations, merchandising, advertising, and inventory management.

Nineteen eighty-six was a watershed year for the company. In order to supply product to its stores and customers more efficiently, it opened a 100,000 square foot distribution center on John Capron Road. It began construction of its first suburban store on Timberlake Road. And, after a period of contentious negotiations, Bert Schewel and his three children (Marc, Donna, and Jack) bought the fifty percent ownership of Elliot Schewel and his two siblings.

The company prospered in the wake of a burgeoning economy. Revenues tripled; thirty new storefronts popped up; nine old ones were relocated to new construction. 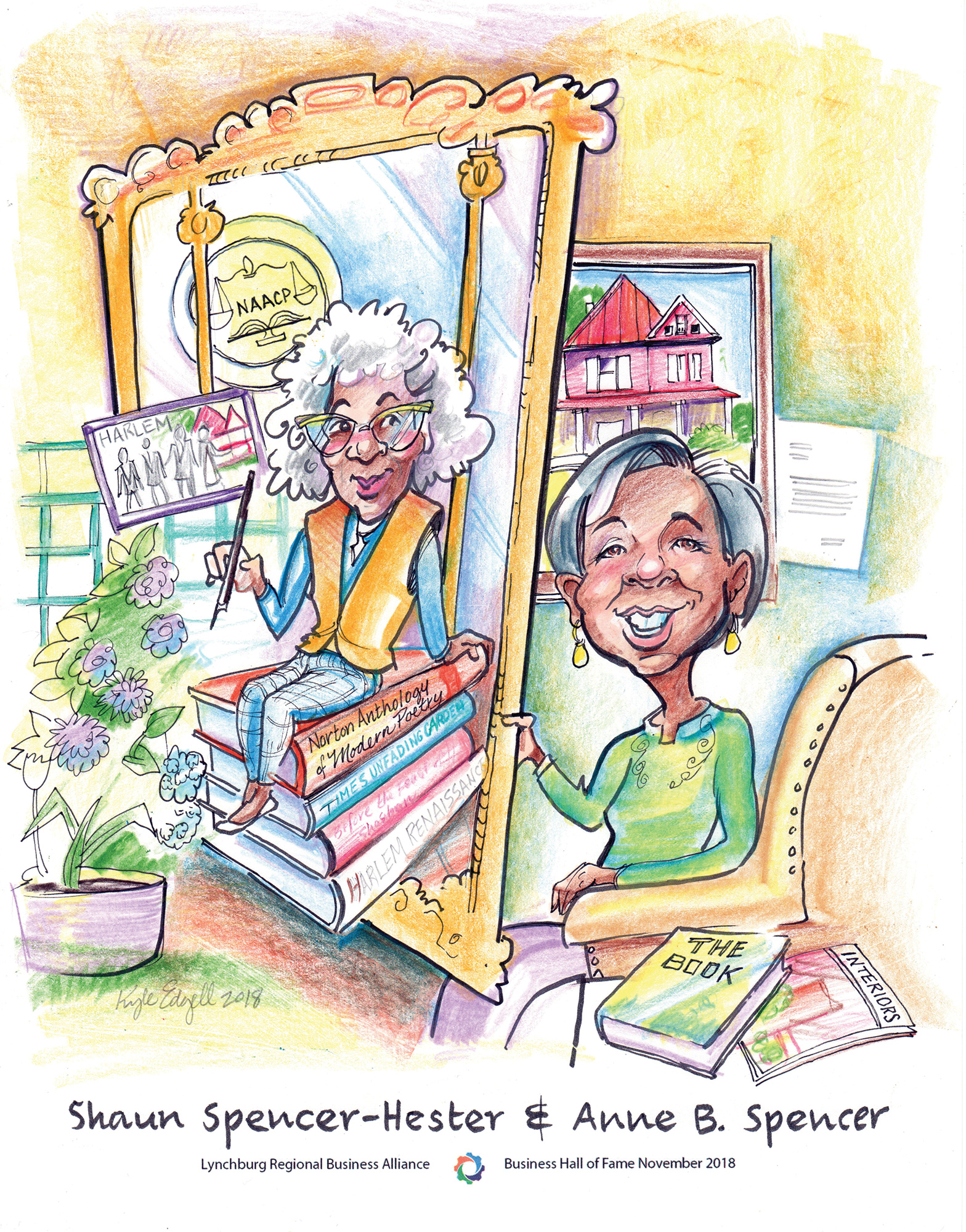 Shaun Spencer-Hester is an artisan, historian, fashion designer, interior designer, museum curator, playwright, and social and community supporter. she currently serves as the executive director and curator at the Anne Spencer House and Garden Museum in Lynchburg. She is the granddaughter of Anne Spencer, an American Poet mostly associated with the Harlem Renaissance. Shaun is the daughter of Chauncey E. Spencer, Sr., a famed aviator and Tuskegee Airman whose papers are held at the Bentley Library in Ann Arbor, Michigan.

Her restoration and curation work during the past ten years at the Anne Spencer Museum has been nationally and internationally recognized and documented throughout the years. Shaun provides personal tours at the museum and has hosted hundreds of visitors and guests. Shaun meets regularly with scholars and academia from around the world and university and college interns.

Shaun is currently writing a non-fiction book which is inspired by her research at the Anne Spencer Museum. The book is Shaun’s perspective as a Spencer family member. It reveals her discoveries, unfathomable family history, and family roots unearthed and intertwined in American history with branches to Aristocratic lineage within the U.S. and abroad. Based on true events it takes place in the present time and connects the Spencer families past history to the Revolutionary War, Civil War, World War I, World War II, American Slavery, and the Harlem Renaissance or New Negro Movement.

Anne Spencer was a poet associated with the Harlem School of Writers. She was a social and civil rights activist, teacher, librarian, wife, mother, and a gardener. More than thirty of her poems were published in her lifetime, making her an important figure of the black literary and cultural movement of the 1920s—the Harlem Renaissance—and the first African American poet from Virginia to be included in the Norton Anthology of Modern Poetry (1973).